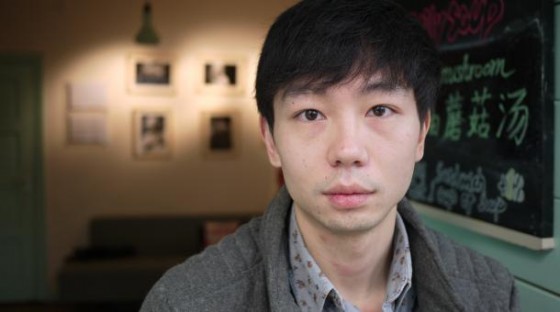 31 year-old Chen Kai, photographed at the sandwich shop “2nd Floor” on The Street of Eternal Happiness. Chen established the shop with a friend after quitting a job as assembly line manager at a state-owned factory that made accordions. Chen belongs to China’s ‘sandwich generation,’ who carry the burden of caring for their children as well as their parents. The pressure often gets in the way of their dreams.

1.Chen’s accordion sits on display at his sandwich shop in Shanghai. His father pushed him to play the instrument when he was a schoolboy in the 1980s, a time when Western products and ideas flowed into China for the first time. Like many of his generation, Chen became interested in Western musicians from the 1960s like The Doors, The Beatles, and Simon and Garfunkel.
2. Li Zixing runs the Chinese website China30s (www.china30s.com), a popular forum for members of China’s sandwich generation.
3.Sandwich shop owners Chen Kai and He Yuxiang, both belong to China’s sandwich generation.
4. Staff at Chen’s sandwich shop at work, serving the daily lunch rush.
正文：

On the Street of Eternal Happiness number 810, sounds of a distant revolution spill out of a sandwich shop. Chen Kai plays a rousing rendition of the revolutionary song “Taking Tiger Mountain by Strategy” on his accordion. It’s an old communist party song from his parents’ generation, and he’s almost forgotten how to play it.

He was forced to learn it as a schoolboy in the 1980s. To him, it means nothing.

Chen’s generation — Chinese people in their 30s — have grown up in an economy that has grown faster than any other in modern history. An economic downturn for them is when GDP growth dips below 8 percent.

They have almost nothing in common with their parents.

“My parents grew up in the 1950s during a famine,” says Chen. “Sometimes they couldn’t even afford to eat. In the ’60s and ’70s, the government forced them to work as farmers in the countryside. When they went back to the city, they were sent to work in factories.”

Chen’s childhood couldn’t have been more different. He grew up middle class in an industrial city in Hunan province in the 1980s, a time when Western products and ideas flowed into China for the first time. “It was a beautiful and innocent age,” says Chen, “It was sort of like America in the 1960s, but without the free love or drugs. It was more naive. Intellectually, we were becoming more open-minded.”

As an aspiring musician, Chen grew up listening to Western groups like Simon and Garfunkel and the Doors. Today, “The Sound of Silence” is still a favorite in China’s karaoke bars. For Chen’s generation, the song conjures up memories not of the 1960s, but the 1980s, which culminated in the student-led protests in Beijing’s Tian’anmen square.

The message from China’s government to Chen’s generation was clear: You’re free to make money and help build China’s economy, just don’t challenge our authority. So with nothing but his accordion and a college degree, Chen reluctantly followed his father’s advice and found a job at a state-owned factory where he assembled accordions.

He lasted three years before he quit.

“My father was very angry with me,” remembers Chen, “He kept calling me. He’d say: ‘You can’t resign just like that! You’re a manager at a state-owned company! This is the iron rice bowl! I didn’t know what I wanted to do with my life, but I knew it wasn’t this.”

Chen had pulled a luo ci – Chinese for “naked resignation” — quitting a job without first securing another one. More and more urban professionals of Chen’s age are doing this. In economic terms, Chen belongs to China’s sandwich generation — middle-aged adults who have to provide for their children and their parents. The pressure of being stuck in the middle is intensified for Chen’s generation; those who were born under China’s one child policy and don’t have any siblings.

Li Zixing runs the Chinese website called China30s, a popular forum for China’s sandwich generation. “More than anything, our parents want us to have a stable job,” says Li. “Their generation was thrown out to sea without learning to swim. They don’t realize that not only do we know how to swim, but that we enjoy it. And we don’t need them to throw us a life preserver.”

But Li admits the waters of China’s economy can make for dangerous swimming. “Those of our generation from the countryside aren’t satisfied with being a tiny cog in a huge labor market,” says Li. “They’re not content as migrant workers on the coast, nor do they want to return home. I think this can be dangerous because they just end up hanging around.”

At the sandwich shop on the Street of Eternal Happiness, Chen Kai rests with his accordion on his lap. It may look like he’s hanging around, but no. This member of China’s sandwich generation owns the sandwich shop. He opened it with a friend half a year ago. “Business is ok,” says Chen. “But we really believe in what we’re doing and at some point we’ll have success.”

Before the lunch rush hits, Chen plays another song. This one’s not revolutionary. It’s just a little piece he wrote after he quit his job a few years ago.

And now, here he is, at his shop on the Street of Eternal Happiness with an instrument his father pushed him to learn, his government taught him to build, playing a song he created.

And sure, it’s not as polished as the communist songs he memorized as a child, but this one is from his heart.